While schools have been working hard to maximise academic achievement, new research shows that soft skills are equally, if not more important than hard skills in terms of employability.

In response to the “soft skills crisis” that is threatening the UK’s future economic prosperity, Bodyswaps joined forces with 5 UK FE Colleges on a Ufi VocTech Trust initiative to find out whether Virtual Reality can provide a solution to bridging the skills gap.

Based on their answers, we created Career Mindset Development, a 15-minute interactive learning simulation designed to give learners guidance and feedback on:

In the simulation, learners are guided through the first day of a fictional internship at a games design company by their virtual mentor, Sophie. Here, they meet and introduce themselves to new colleagues Flo and Leo, before helping them to fine-tune a pitch they’d been working on for a new computer game. Learners then design a new game of their own using a simple ideas generation technique and pitch it back to Sophie.

The simulation was piloted at the colleges between 1 March and 30 April 2021, with the following key findings. Full details can be seen in our VocTech VR Pilot Project Report.

The study was designed to determine whether virtual humans could successfully help learners to improve soft skills.

The solution helps build self-awareness through a ‘bodyswapping’ mechanic that allows learners to experience their own behaviour from another person’s perspective. AI analytics measure data on verbal and non-verbal aspects of their performance, providing detailed feedback and personalised recommendations to help them improve their soft skills over time. Qualitative feedback was largely positive, with remarks like: “It was brilliant!”, “I believe this is revolutionary,” and “I can see it helping many people in the future.” But one student wrote: “It was a very cool and new initiative. I still remain confident, however, that face-to-face experiences are the ones which last and are more effective,” indicating the potential value of blending VR solutions with F2F activities.

Career Mindset Development was designed primarily to be run on VR headsets, but the need for homeschooling caused by the Covid-19 pandemic meant that four of the five colleges were forced to abandon these plans in favour of deployment using more readily-available tech in the form of smartphones/tablets.

While the content of the simulations is the same for both devices, the experience is naturally less immersive on a phone and feedback is limited to verbal aspects of the learner’s performance as behavioural cues could not be picked up and analysed by phones in the same way as with a VR headset and hand-held controllers.

VR users told us that immersion and interactivity in a realistic workplace environment, combined with the ability to review performance and identify areas for improvement were two of the most enjoyable aspects of the experience. By contrast, smartphone users reported feeling strange or uncomfortable talking to a phone or tablet.

Working together to improve outcomes

Overall, feedback from staff facilitating students with the pilot was positive, with one tutor commenting that:

“Students were noticeably more confident after using the app. Our students are generally quite shy - and the psychological safety of VR helped them to develop their confidence and practise answering questions for themselves. Students who repeated the experience for a second time, took the experience much more seriously than the first time round and really tried to give good answers - so it was obvious to see the impact”.

However, deployment of the solution was complex and staff felt that the process needed to be simplified and more support was needed in the form of an online ‘Knowledge Centre’, which we are looking to address.

The pilot study also demonstrated to us the importance of ensuring that learners’ first contact with the simulation is done as part of a facilitated session (something that was not feasible for most of the colleges, given that the trial was conducted during lockdown) and, especially, that students were given a safe and quiet space in which to complete the simulation, free from onlookers and other sources of distraction.

Further longitudinal studies with partner organisations would be welcomed to determine whether the experience led to long-term improvements in professional communication skills.

Career Mindset Development uses Virtual Reality and Artificial Intelligence to guide learners through some of the soft skills most needed to navigate the world of work. Learners receive tailored guidance and personalised coaching on essential techniques like introducing yourself to people you don’t know, making a positive impact and communicating ideas clearly and with confidence. 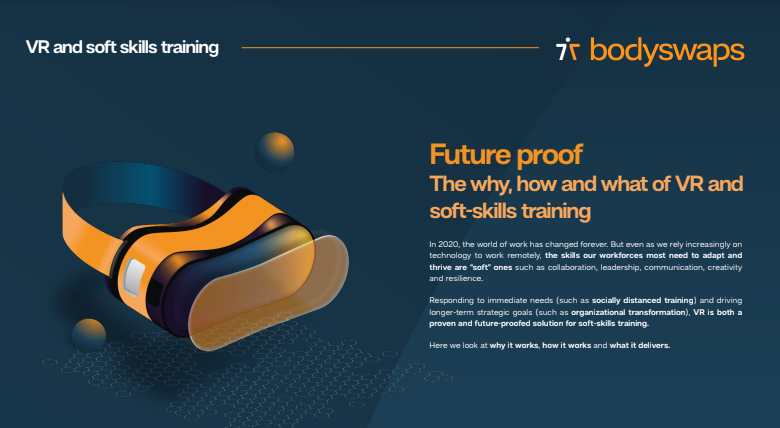